What I usually do:

Here I don’t mind the .skp generated by Transmutr.

I usually do this to be able to save my materials. As the models in a library often contain several variants of a plant - for instance - and it’s convenient to be able to drag and drop pre-edited materials from Thea’s material browser.

Then for the other variants of the same plant, I just swap the materials. Then I save the .mod.thea.

Open the Thea Browser and drop the newly edited .mod.thea in sketchup’s viewport.

In a frontal view, zoom extent on the mesh and render the view with alpha render element on.
Save the image as PNG. This will be used as a billboard.

Move the face to the origin (I used to make it “face to the camera” but now I prefer avoid it to be able to see the orientation better when skattering).

Select All (the billboard face plus the Thea proxy bounding box) and make a component with the name of the proxy and .mod added.
Use TIG’s Originate Components Axes to make sure that the compo’s axis are correctly centered.

Use a frontal view, zoom extent again and save the component in the same folder as the .mod.thea

Now I know this is a lot of work, and could be streamlined if I knew how to code…

For instance, I’d like Transmutr to be able to affect materials of an imported model from a folder containing identically named materials (.mat.thea).
Previously I used Thea Studio but now it’s not Thea v2 compatible anymore. Perhaps the Studio version allows for these features?

It would be handy if Transmutr was able to render the billboard itself (as was proposed in the roadmap earlier) of course, but this would need a direct connexion to the renderer and I understood that Altair doesn’t provide the SDK for this kind of purposes.
SKP outputs generally aren’t as explicit as the colors often differ from the SKP and THEA and one of my aims is to use the thumbnails to get a sense of color information.

For instance, I’d like Transmutr to be able to affect materials of an imported model from a folder containing identically named materials (.mat.thea).

This is already on our todo list.
If you are curious, it was discussed here: https://thearender.com/forum/viewtopic.php?p=184360#p184360
I have no ETA for this feature, though.

Perhaps the Studio version allows for these features?

Transmutr Studio? Not directly, but if you were into scripting, the Command-Line Interface could prove useful.

It would be handy if Transmutr was able to render the billboard itself (as was proposed in the roadmap earlier) of course, but this would need a direct connexion to the renderer and I understood that Altair doesn’t provide the SDK for this kind of purposes.
SKP outputs generally aren’t as explicit as the colors often differ from the SKP and THEA and one of my aims is to use the thumbnails to get a sense of color information.

Indeed, we don’t have access to a Thea SDK. The feature we are planning will generate the billboard, but not from SketchUp. It will either use the WebGL preview in the Transmutr UI, or a very simple renderer (but it will likely support only diffuse and opacity, so it might not match the Thea render look).

I would like to have an option in Thea to generate billboards automatically, but this still will have to wait.

This would be great indeed! Thanks Tomasz.

BTW it would be great to include in Transmutr the possibility to generate a low poly textured skp as a proxy .mod.skp next to the .mod.thea. (mostly for people)

I do it manually by decimating the fbx/obj mesh to around 8-15k faces in Transmutr or in 3dsmax (which adds a step in the worflow) but it’s way more explicit in my SKP models than having just pointclouds or bounding boxes to play with.

This way, I can check visually if my sitting people are correctly placed on the chairs, staircases, etc. without having to render each time. 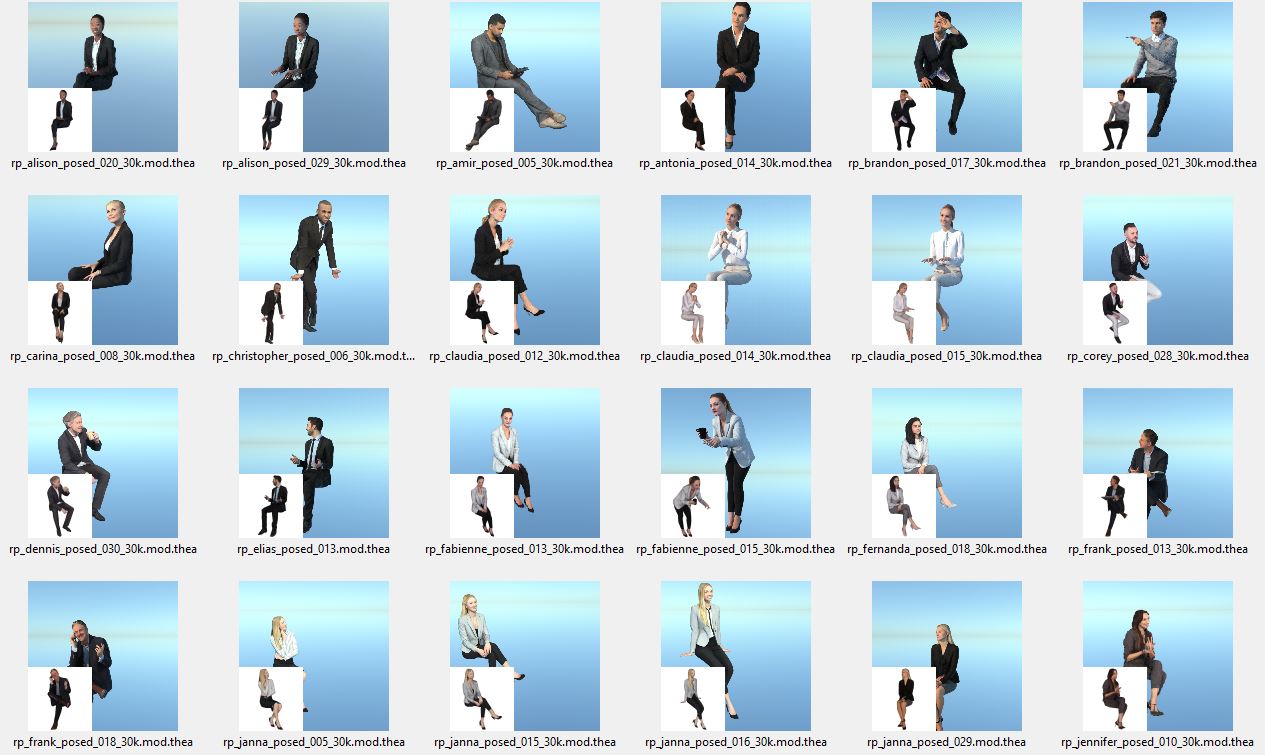 BTW it would be great to include in Transmutr the possibility to generate a low poly textured skp as a proxy .mod.skp next to the .mod.thea. (mostly for people)

You can already do that.

The .mod.thea will be full geometry, but the placeholder will be simplified and textured.

OK, I’ve tried that.
It half-works. I can indeed generate a decimated lowpoly skp, which renders as full geometry in Thea.
But in thea browser, I see no skp thumbnail attached to the thea proxy.

And there are a redundancy (the skp and the mod.thea, side by side whereas with my workflow I only see one occurency, the mod.thea with 2 thumbnails - the skp thumbail embedded within the thea thumbnail).

How can I solve this? I’d like Transmutr to automatically save the lowpoly skp with “.mod.skp” as file extension, so that thea browser recognize it as a “cart” proxy skp along the mod.thea …
When I add “mod” to the filename manually, the mod.thea gets renamed too, which gives mod.mod.thea file extension and therefore the saved mod.skp doesn’t get recognized as the proxy of mod.mod.thea file. I know, complicated…

When I manually remove the “mod.” from the mod.mod.thea filename, the mod.skp gets correctly recognized as a proxy. But its thumbnail is black. 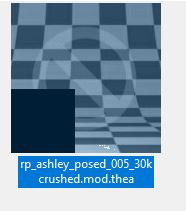 So in my whishlist, could Transmutr also resize the embedded diffuse map when saving the proxy low-poly skp file? Usually diffuse maps for 3d people are between 2k and 8k. 8k is overkill for my usage so I generally tend to resize manually to 2k or 4k before affecting them to their slots (diffuse, roughness and normal)… But for the proxy skp, I use a 512x512 or 1k version. This way, it could generate lighter proxy skp, both in terms of geometry complexity and texture size. Possible?

BTW this is how I sort my thea plant proxies (always evolving library): 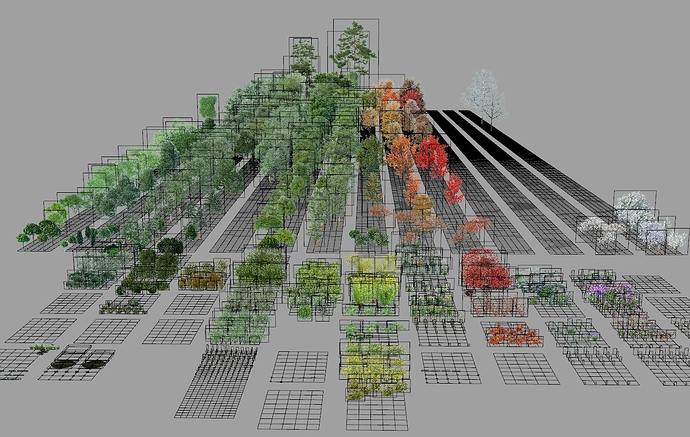 thea plants1410×895 292 KB
Note that this is an old skp file, nowadays I’ve split the file between bushes, waterplants, trees, vines, flowers, etc. because there was no interest to have them all in the same file anymore…
Anyway, I need my thumbnails to be very low res, otherwise my skp memory footprint will explode. It would be great to be able to have very small ones( or be able to setup custom sizes)…
2 Likes
Ryo_Inagaki December 5, 2020, 3:07pm #10

Thomas, is it possible to include, in the Materials section of Transmutr, a slider for Roughness?
It seems that the actual Relection slider translates in a mix of Roughness and Reflectance in Thea.
I often use Falloff procedural in the reflectance slot as well. If possible, could you include this option too?

Another suggestion,
Could it be possible to configure some presets as buttons, next to the Load ans Save Icons? It would be simpler to access them.

Thomas, is it possible to include, in the Materials section of Transmutr, a slider for Roughness?

Yes this is planned for a future version.

Could it be possible to configure some presets as buttons, next to the Load ans Save Icons? It would be simpler to access them.

I guess we could have a button to load the last preset, or a pre-defined one.
We have planned to add an option for a default preset (Transmutr would open with this preset already loaded), would it be enough?

A default (customizable) preset is fine, as a ‘by default load the last used preset’ option could be nice too. It would avoid having to select the preset button each time, indeed.

could you please explain step by step how you made this nusery of plants?
This would be very useful for my workflow with V-ray.

I am unable to use the various proxy methods as descibed on the transmutr website. Everytime I export my file is exported with face skipping regardless of the placeholder that has been seleced.

Can the files be copied and pasted into another file? Can you explain the Billboard file path? Lots of questions, thanks in advance. David

Basically, I generate a proxy with Tranmutr or the classic way with Thea. This generates a .mod.thea file and along with it, a corresponding skp file with a box showing the bounding box of the object.

Then I import this skp file into a master skp file that I use to create template rendered plates (with correct HDR and camera settings).

I quickly render the imported object (finetuning materials along the way), and save it as transparency enabled PNG. Btw it’s useless to create huge render resolutionwise as it just uses more memory. 600px high image is plenty enough (perhaps even already too much).

In Photoshop, I crop the tranpsparent pixels and overwrite the PNG.

Back into Sketchup, I paste the PNG as a texture on the box (you need to create one face on the imported box before btw), resize the PNG to fit the face (if PS cropped the transparency correctly the PNG fits perfectly the face).

I select and move the face to the origin of axis XYZ(0,0,0) and convert the face to a face-me component, and then save the SKP with the name filename.mod.skp alongisde the filename.mod.thea proxy file (in the same folder).

Be careful with the textures folder location (the ideal would be that every needed texture would be in the same folder but it’s not always possibel or practical).

Then import the created .mod.skp compo into a nursery skp file. If you have too many objects in this masterfile and SU starts to get sluggish, try a script that would reduce the resolution of the bitmaps or simply separate some of the objects into smaller groups (and files).